Adding to our work in the science and technology sector, we've created a new state-of-the-art life science incubator on the edge of Nottingham’s Creative Quarter.

The £27 million BioCity Discovery Building is one of Nottingham’s most significant developments over the last decade and will support more than 700 new bioscience roles in the city over the next 30 years. It is a mixed-use science and business hub featuring laboratories, office space, chemical and solvent storage rooms, and a café.

The building covers almost 7,000m² of office and laboratory space, with capacity for 350 users and eight tenants, with Sygnature Discovery being the facility’s main tenant.

Nottingham has a strong reputation as a science and technology city, its ‘Eastside’ is intrinsically linked with pharmaceuticals research and development. This area is the former home of Boots R&D activities where the discovery of ibuprofen took place! 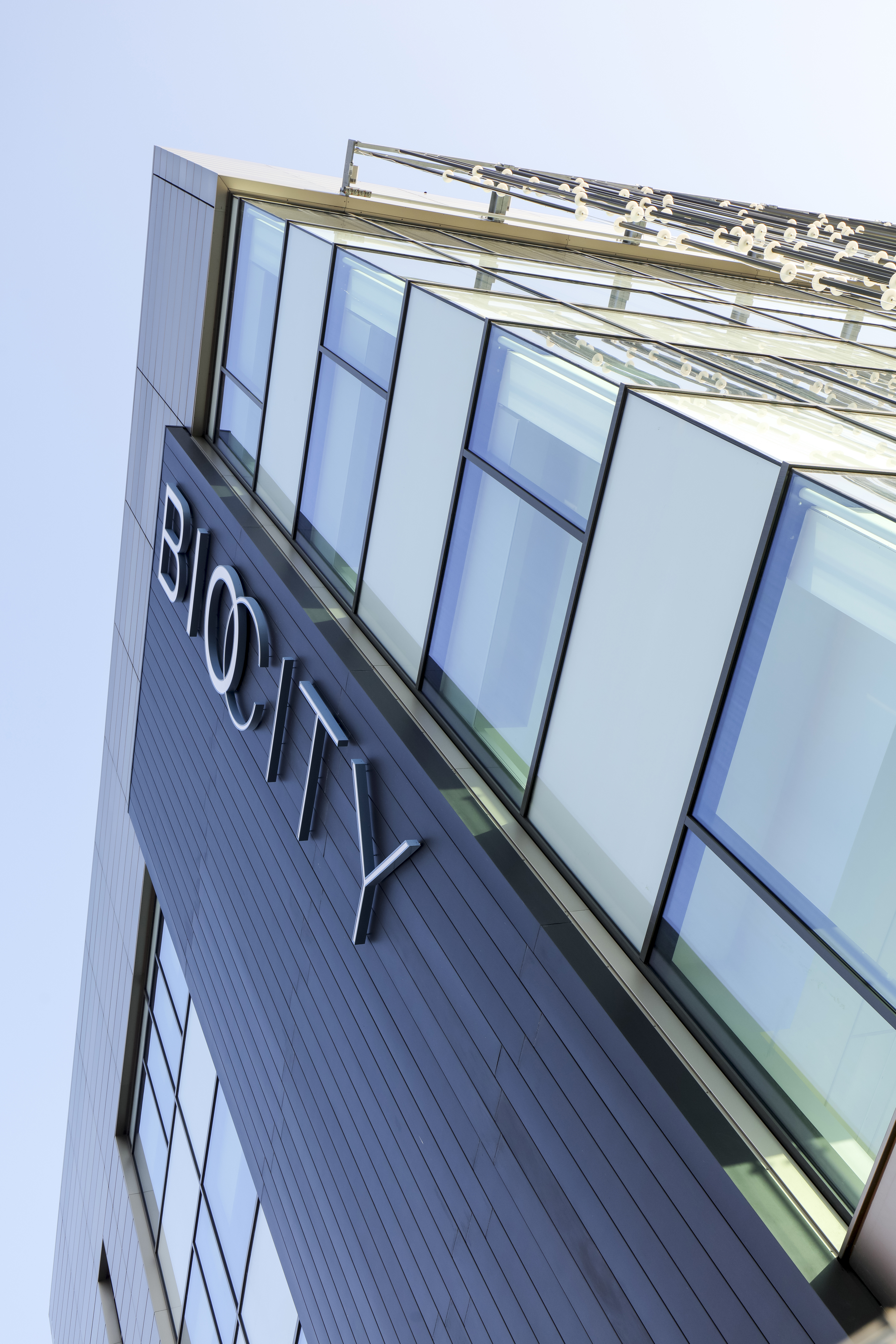 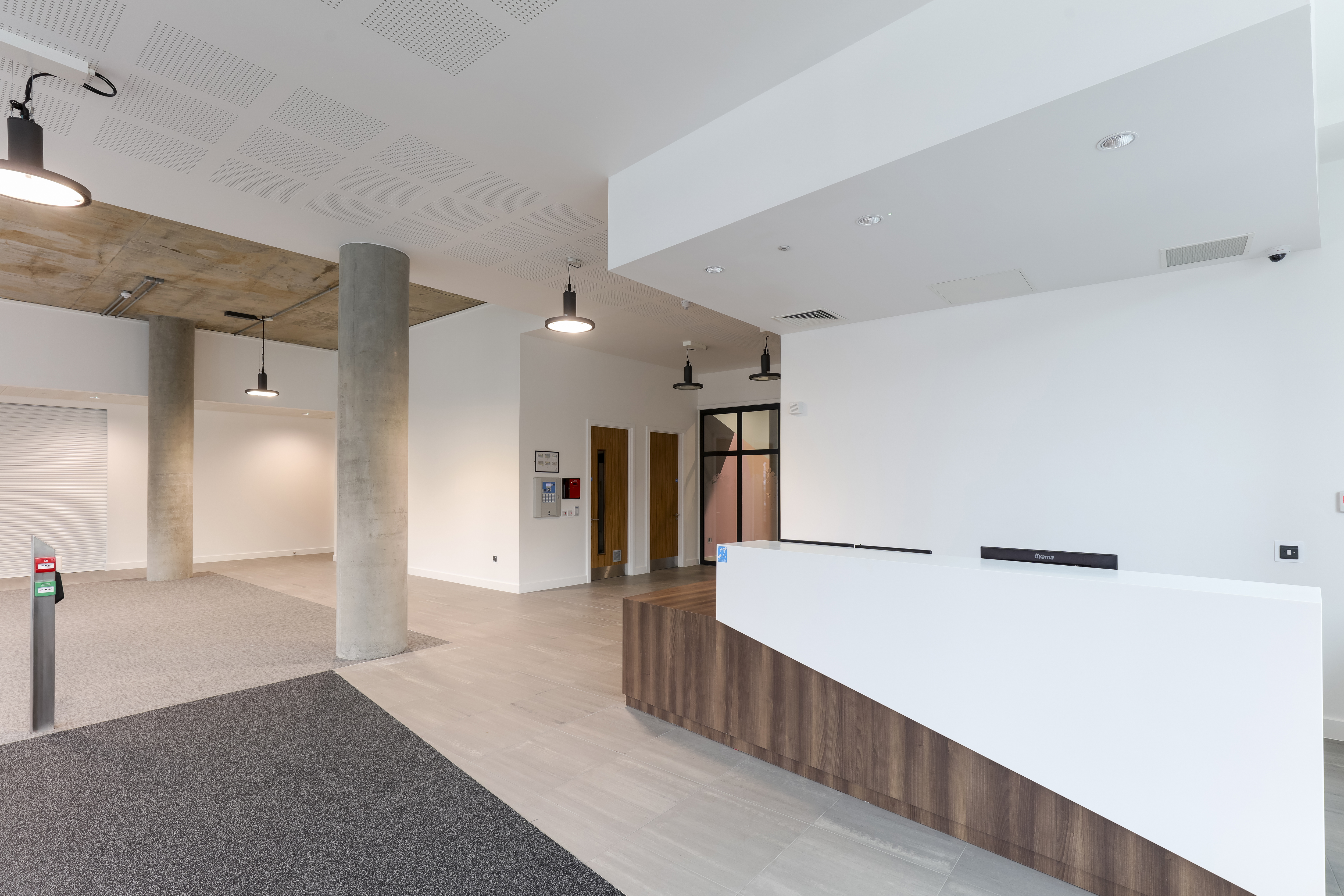 The new five-storey facility provides specialist high-quality research laboratory space and offices plus areas for conference and meeting facilities and is expected to act as a catalyst to bring more life science employers to Nottingham. Life sciences and healthcare sectors currently account for 55,000 jobs across 1,400 firms in the Nottingham City region.

Procured by Nottingham City Council under the Scape Major Works framework, we worked with the architect CPMG of Nottingham to deliver the facility.

Sygnature Discovery, the UK's largest independent provider of integrated drug discovery programmes, are based across three of its four floors.

A key feature of the building design is a sunscreen, known as Brise Soleil, designed by Nottingham artist Wolfgang Buttress in partnership with Nottingham Trent University physicist Dr Martin Bencsik, which reduces the risk of the building overheating, making it more energy efficient.

The installation, known as Corona, includes a curtain of 17-metre high aluminium tubes with fibre-optic lights linking the building with NASA satellites – providing a stunning entrance to the east side of the city.

"This expands on the science sector in Nottingham to replace some of the commercial services it previously offered, which will retain graduates in the city. The building provides the status and gravitas that sets the benchmark for future developments in the city in the coming years."

BIM Level 2 was instrumental to the scheme and involved coordination of architectural, structural and service elements. In turn, this resulted in numerous time savings, most notably the construction of the concrete frame three weeks ahead of programme.

The use of BIM by mechanical and electrical partners and supply chain partners enabled many components of the build to be manufactured off-site, while work was simultaneously taking place on-site. This process was rewarded with the RICS BIM4SME 2017 award for Subcontractor Engagement.

“BIM was central to the success of this project and CPMG acted as a focus point between Willmott Dixon and our other partners to ensure industry best practice in BIM was adopted. BIM helped to inform better decision making between all supply chain partners, the customer and occupants, without impacting on the design and construction programme, and enabled the manufacture of off-site components where possible.”

Speaking of the development, Peter Owen managing director at Willmott Dixon in the Midlands:

“This was a fantastic project for Willmott Dixon; we are extremely pleased to have been involved in such an iconic development that has provided jobs and supported businesses. Nottingham is one of the UK’s six ‘science cities’ designed to spearhead national economic growth, and our expertise has helped it to grow further as a major stimulus to the city.”

The site is a great example of brownfield re-development; it was bought, cleared and decontaminated by Nottingham City Council for the state-of-the-art life science incubator to be developed. The facility is fitted with high-tech biology and chemistry laboratories which will be built in a range of sizes to allow companies to expand, with ancillary space for commercial leasing to both start-ups and small and medium-sized enterprises.

Our team also created a strong working relationship with Central College Nottingham to provide several rolling work experience placements. In addition, our management trainee Sarah Bridge completed her masters at Nottingham University before working on the biosciences project and was recently nominated for a Women in Construction Award!

Local people also engaged with the scheme through the industry initiative Open Doors, with 89 site tours delivered for people to learn more about the construction process and the Discovery Building.

Peter Owen, managing director at Willmott Dixon in the Midlands: “

This was a fantastic project for Willmott Dixon; we are extremely pleased to have been involved in such an iconic development that will provide jobs and support businesses. The science and technology sector is very important to Nottingham and our expertise is helping it grow further as a major stimulus to the city.”

Watch it being built!