Creating a new film school at the London Screen Academy

Our team at Willmott Dixon Interiors transformed the former factory in Islington into a new film school – the London Screen Academy. a new specialist sixth form-only free school for 1,000 16- to 19-year-olds, providing training in film and television, as well as a conventional educational curriculum. 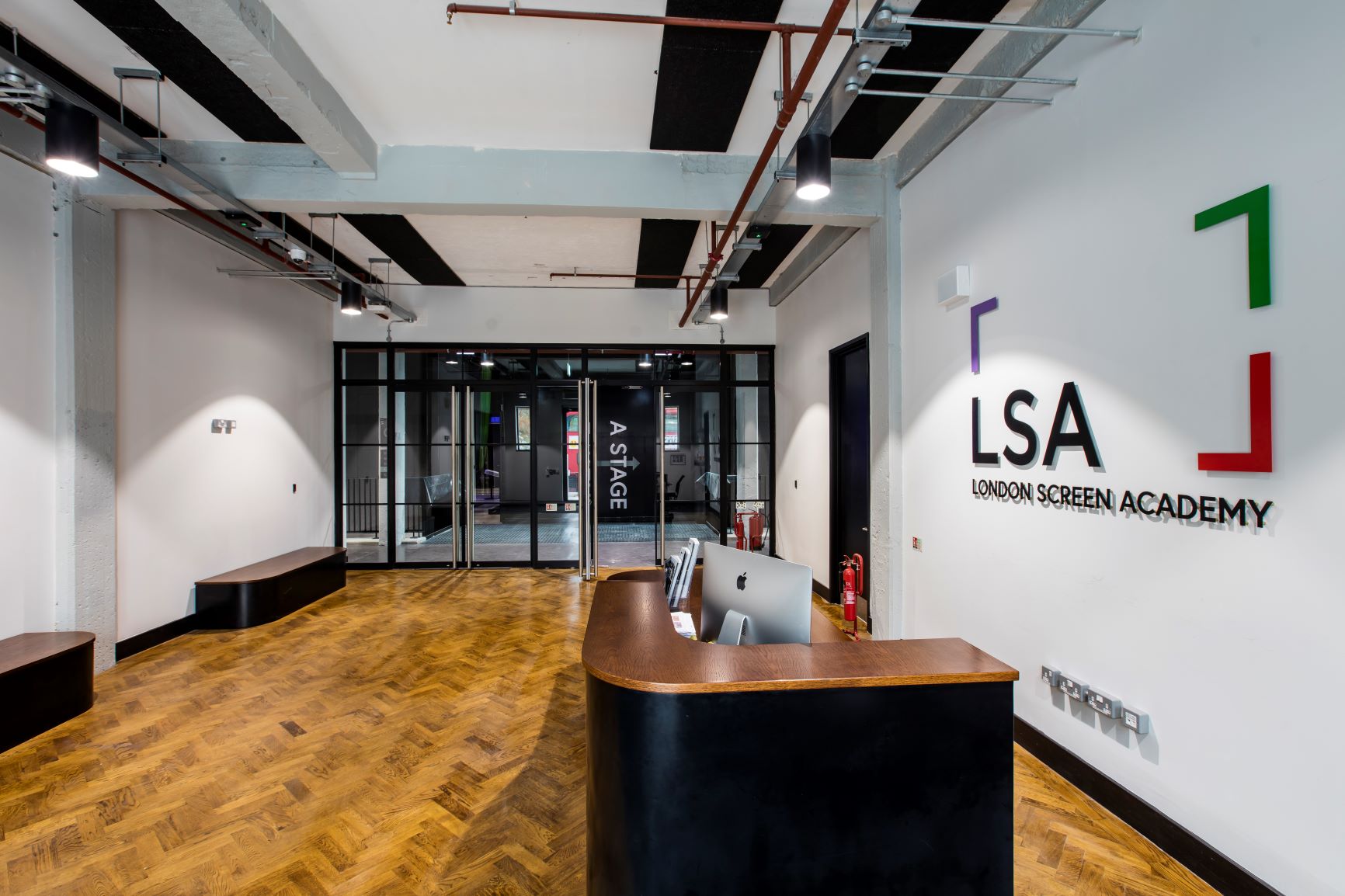 The multi-million pound project included the refurbishment of 80,000 square feet of space at 62-66 Highbury Grove in Islington, creating a new sixth form school with specialist areas including editing suites and music and performance spaces.

The building is Ladbroke House, a four-storey brick building built in the 1930s as a factory facility for radio and television manufacturer AC Cossor, the first in fact to start selling TVs to the public and so a prophetic forerunner to the building’s future role. By 1937, the owners of Ladbroke House claimed that it was “the “largest self-contained radio factory in the British Empire.” 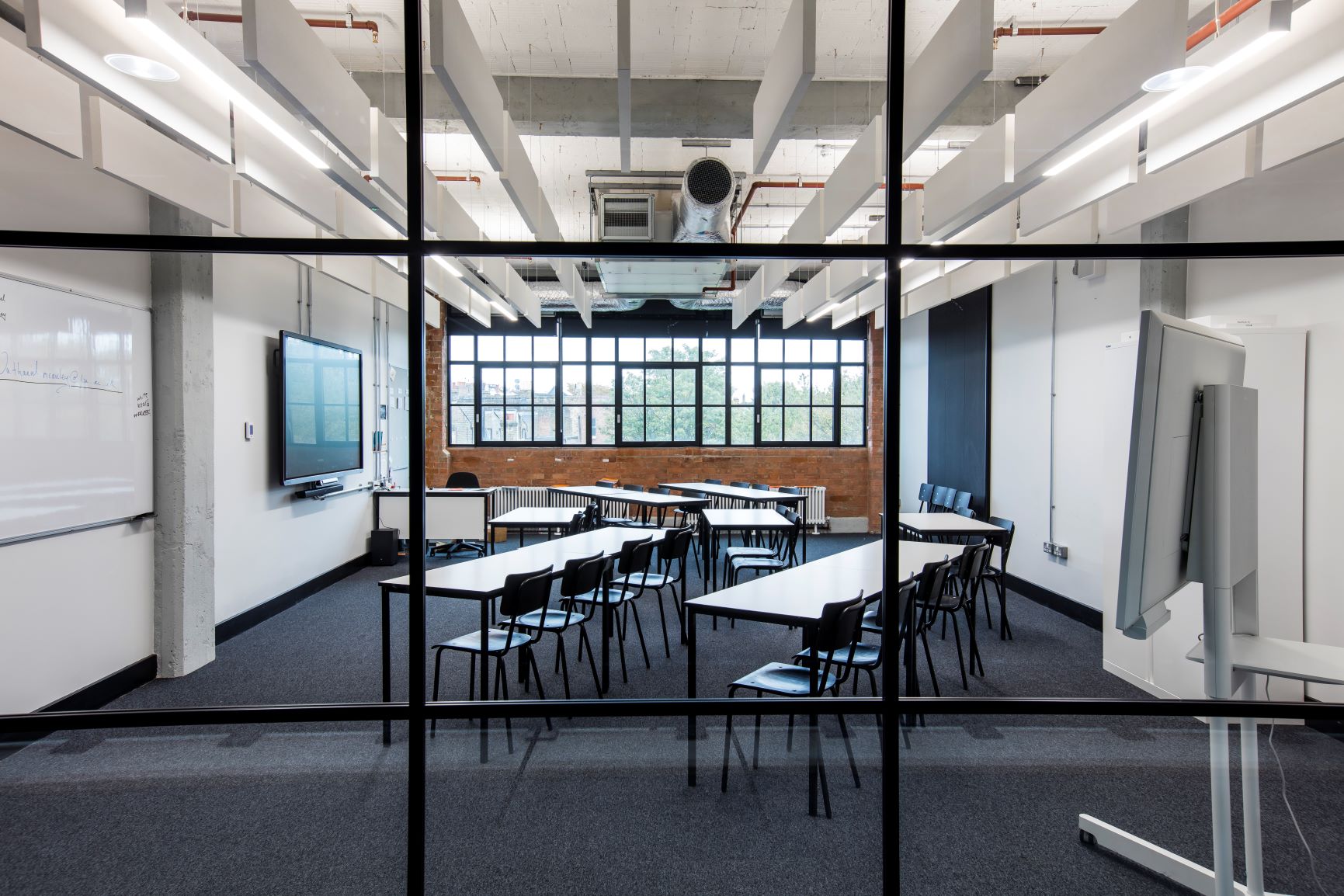 The building’s 1920s exterior remained unchanged for the new sdhool, yet inside the changes were huge.

The architects, Architecture Initiative, designed the main studio to be a three-storey self-contained unit occupying the middle of the cube-shaped building, with classrooms wrapped round it in a U-shape on three sides of each floor with an additional studio in the lower ground.

A world of learning about the art of film making

Procured through the Southern Construction Framework, our Interiors team worked closely with the design team to deliver the project ready for the first intake of 300 students in September 2019, with the LSA expanding eventually to a capacity of 800-1000 pupils.

Our refurbishment gives the building a major internal reconfiguration as well as adding a new steel frame structure which provides a three-storey film production studio and supporting facilities. The scope of works also included new windows and façade repairs to the existing building.

The logistics of building within a building was the most challenging aspect of the project. Director Tim McEvoy explain,s:

“We’re surrounded by roads on at least two sides and we share party walls with adjacent housing. Because it’s such a tight site there’s also no laydown area for any kind of storage or assembly during construction. Access is limited too, we had to form a hole in one of the basement light well walls and everything, including all the temporary steelworks, tower crane and piling rig had to come in and out of that.”

A new production studio is only one half of the project; the rest has involved the extensive refurbishment of the original building that surrounds it. While the structural condition of its primary frame was generally good, there were some wear and tear problems associated with cracked lintels and corroded steel reinforcement helibars within concrete, all of which has now been repaired. The exterior brickwork has also been restored and repointed.

One of the biggest refurbishment challenges to the non-studio part of the project was the sagging and heavily deflected floors that were in the existing building. The beam-and-pot floor construction had been filled with terracotta void formers but over time this has sagged by up to 60mm across the full extent of the floor.

“Refurbishment projects are an ideal opportunity to embed sustainable technologies. At London Screen Academy, we used the BREEAM ‘Non-Domestic Refurbishment and Fit-Out 2014’ standard.”

A key aspect was a heating system that makes use of passive heat recovery, using outdoor air to cool the building where possible. Further low carbon technologies include 100% LED lighting throughout the building, with additional daylight dimming functionality and presence detection. Extensive electricity, water and gas metering was installed and is monitored by the Building Management System (BMS) so that data can be analysed to further optimise energy usage.

The building’s roof has a green area to enhance biodiversity, solar PV panels to generate renewable electricity and export back to the national grid, achieving cost savings, improving occupancy wellbeing and retaining the building’s existing character.

By creating a new building inside an old one, this old radio factory has its media heritage renewed by structural creativity that, in the true spirit of film-making, remains firmly behind the scenes. 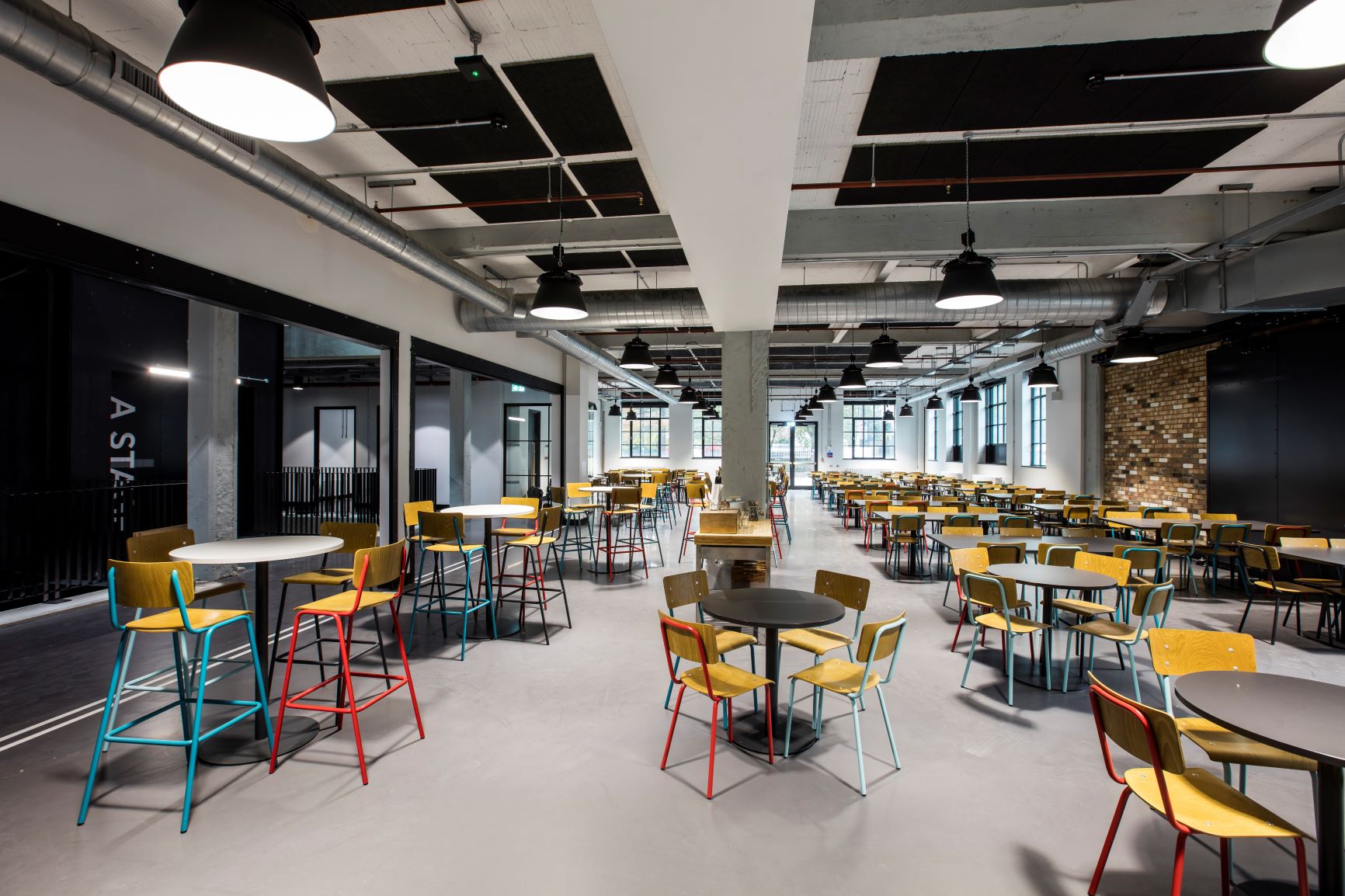 The Secretary of State for Education